A recall has been announced for Primal Pet Food’s Chicken and Salmon Formula.  Are raw foods safe?  I’ll tell my opinion as a veterinarian as you read through this article.

But first, you can read the details about the recall here.

Here is a summary: 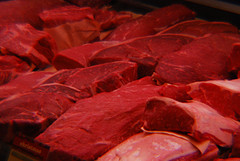 You just can’t win.  In 2007 there was a massive recall on commercially made pet foods.  Pets were getting sick because of contaminated gluten from China.  This prompted a lot of people to run to more “natural” foods.  I found this article here that was written at the time of the recall that describes how people were turning to natural foods.  In this article, Matt Koss, the founder of Primal Pet Foods says,

“Think about what dogs eat in the park. It doesn’t harm them…Primal’s orders are up 30% since the recall…Before the recall, people had a lot of faith in the big brands … but people are starting to figure out they don’t always start with the best ingredients.”

And now, Primal Pet Foods itself is affected by a recall.

I have never been a fan of feeding raw foods to pets, for a few reasons.  But the main reason is that the risk of Salmonella poisoning is there.  I have seen a dog die a horrible death from Salmonella poisoning and it was awful.  Another risk is that humans can get salmonella from handling the food or even from cleaning up the feces of their dogs.

Every time the raw food debate comes up, you will hear pet owners proclaiming that all of their pet’s health problems went away after feeding raw foods.  You will definitely read a lot of testimonials.  Here’s something I read on another website:

“The only reason that vets don’t like the raw food diets is becuse they have almost no nutritiional training in vet school and the little that they do have is provided by hill’s science diet, i have feed raw foods for years and i sell dog food as a career so i think i know what i am talking about”

Ahhh….it’s amazing how many people think that my decisions on which foods to recommend are based on the fact that I sell commercially made prescription foods in my clinic.  I really don’t care whether you buy pet food from the veterinary hospital or elsewhere.  I am definitely not going to advise you to feed a certain food just so that I can make money on it!  What I look at is real, hard research.  So, what does the research say about raw feeding?

I spent a lot of time searching for research that spoke of the benefits of feeding raw foods.  I couldn’t find any!  There are a lot of people who swear by it…but this is not scientific proof that these diets are better!

If any of you know of research articles that talk about the benefits of feeding raw food, I’d love to hear of them.

In my opinion, the risks of feeding raw foods outweigh the benefits.  I don’t recommend them for my clients’ pets.

The research shows that there is risk of bacterial contamination to the pets and to the owners.  Also, it is really hard to balance a raw diet so that your pet is getting the right amount of nutrients.

I know this is a controversial subject!  I’d love to hear your thoughts!

15 Responses to "Are Raw Foods Safe?"