It came to my attention today that there is a shortage of Caninsulin in Canada.

Caninsulin is a type of insulin that is made for dogs.  However, a lot of cats are on this insulin as well.  It is the exact same insulin as Vetsulin which was previously available in the United States.  Earlier this year we learned that Vetsulin was no longer going to be available in the US.  You can read about this problem here:  Vetsulin shortage.

I have never understood why Vetsulin would be discontinued in the US and Caninsulin would still be allowed to be sold in Canada.  They are the same product.  When Vetsulin was discontinued it was because the insulin was not believed to be stable.  As a result, pets who were on Vetsulin ran the risk of their diabetes not being well controlled.

I have been suspicious all along that the problem affected Caninsulin as well.  I have noticed over the last few years that many of my patients on Caninsulin were needing higher and higher amounts of insulin in order to remain stable.  Because of my suspicion, I’ve transitioned a lot of my patients to another type of insulin.  I don’t prescribe Caninsulin any more when I am starting a newly diagnosed diabetic dog or cat on insulin.  For most dogs I will use NPH insulin (see below) and for cats I am very impressed with Glargine (Lantus) insulin.  I have had a number of cats revert to being non-diabetic after several months of Glargine insulin.


Is Caninsulin coming back?

I’ve heard reports that Caninsulin is only on temporary backorder and will be back in mid November, but so far I can’t confirm anything.  When I look back at my post on the Vetsulin shortage I see that the manufacturer had promised it was coming back to the market, but it never did!

The Caninsulin Website doesn’t give us any further information.  There is no mention of the shortage.

If your pet is on Caninsulin, my advice would be to talk to your vet about switching to a different type of insulin.  If you are going to switch insulin types it is extremely important to do this on the advice of your vet.  Do not attempt to do this without veterinary supervision.

There are several alternatives to Caninsulin: 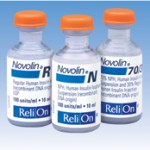 How to start on a new insulin:

I can’t stress enough how important it is to speak to your vet to learn how to transition to a new insulin.  What we generally tend to do is  start over as if this is the first time the pet is receiving insulin.  I will usually start the dog on a low dose that I know is extremely unlikely to be too much insulin.  (This means that there may be a period of time where your dog has a recurrence of the symptoms of drinking and urinating too much.)  Then, after a week or so I like to do a glucose curve.  I will usually give my clients the choice of doing the curve in the clinic or learning how to do it at home.  Once I see how the dog is responding to the new insulin, then I know how much to increase the dose of insulin.  Often there will need to be several glucose curves done before we are satisfied that we have the correct dose of insulin. 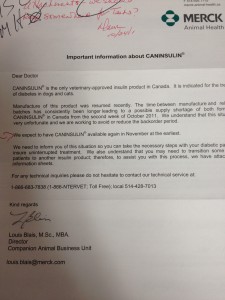 I just received the following letter in my office. (See photo on left and click to enlarge.) The letter is from Merck, the makers of Caninsulin. It states that there was a period of time where Caninsulin was not being manufactured but that it is now available again. They also sent us some information on how to transition to another insulin if need be.

I find this interesting. Why would a company encourage vets to transition to a different product? My guess is that eventually they will stop making Caninsulin. They may be preparing us for this. But, time will tell!

Was your pet on Caninsulin?  Have you been affected by the shortage?  I’d love to hear how this has affected you and your pet.  Please leave a comment below.

Leave a Reply to Rhoda Bowman