A 6 year old cat in Oregon has been diagnosed with bubonic plague. Bubonic plague was the cause of the Black Death that killed 75 million people in Europe in the 14th century. 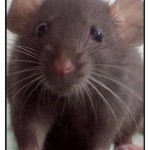 The cat, named Meow, presented to the vet with an abscess.  Now, it’s really not that uncommon for a cat to have an abscess.  But, when the vet sent samples to the lab, it turned out that the cause of the abscess was Yersinia Pestis, the organism that causes the plague.

In 2010, two humans were reported to get the plague.  One was believed to get it because of letting his dog sleep in the bed.

Plague is generally carried by rodents.  An animal or a person can get the plague by either being bitten by an infected rodent, or by fleas that were carried by the rodent.

One of the best things you can do to protect yourself from the plague is to get your pet on a good product for flea prevention.