Chicken Jerky from China may be causing Fanconi syndrome in dogs

IS GLYCERIN THE TOXIN IN CHICKEN JERKY? An intriguing story!

Added October 25, 2011:  Even though this story was first published in June of 2011, we are still getting reports coming in of dogs getting sick and the culprit is suspected to be chicken jerky treats manufactured in China.  Read through the comments section at the end to get more interesting discussion on this problem.

Added November 4, 2011:  I have just filed a report with the FDA and alerted them to read the comments on this blog.  I would urge any of you who have a dog who you suspect is ill because of eating tainted chicken jerky to have your vet file a pet food safety report with the FDA.

Added November 18, 2011: The FDA has paid attention! Today they announced a caution against chicken jerkey. You can read it here. There is no official recall yet, but stay tuned. And please leave a comment if you think your pet has gotten sick after eating chicken jerky treats.

Added December 29, 2011: MSNBC is reporting that the FDA has now announced that they are investigating 353 reports of dogs getting sick after eating chicken jerky. The FDA is working hard to determine the reason, but so far has not figured out what the culprit is! Because there is no specific product that can be blamed, the FDA has not issued a recall.

Added Jan 9, 2013: There has been a recall announced on two brands of chicken jerky because of antibiotic residue. However, it is unlikely that this recall is connected to the problems described in this article and comments. Click here to read more about this recall.

Note: The original article was written because some Canadian vets were suspecting that chicken jerky made in China was causing Fanconi syndrome in dogs. However, there may be more than just Fanconi syndrome now. Be sure to read the comments in this article to get the full story.

Some Canadian veterinarians are noticing an increase in cases of Fanconi syndrome.  The CVMA recently published this warning:

Recently, several veterinarians in Ontario have reported cases of dogs that have been showing signs similar to Fanconi syndrome.  All dogs in the reported cases had been fed chicken jerky treats that were manufactured in China. 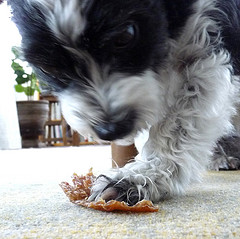 What is Fanconi Syndrome?

This is an uncommon condition.  It affects the kidneys and causes them to leak glucose (sugar) and other electrolytes into the urine.  Dogs that have this condition will usually be very thirsty and will urinate excessive amounts.  The most common finding in laboratory tests is that the dog has glucose in the urine, but has a normal blood glucose level.

Some dogs can be born with Fanconi syndrome.  But, the latest concern is that there is something in Chicken Jerky strips made in China that is actually causing some dogs to develop this problem.  Some dogs can get very sick and even go into renal failure and die.  Other dogs will have an increase in thirst and urination and possibly have accidents in the house and then they may go on to have a full recovery within a few weeks of stopping the chicken jerky treats.

What ingredient from China is causing the problem?

At this point we don’t know what exactly is causing the problem.  We are seeing more cases of Fanconi syndrome than usual.  (I have had two in my practice that I am aware of in the last year, and both had eaten Chicken Jerky treats.)  At this point it seems that the increase in cases is mostly being seen in Canada (but still connected to treats imported from China.)  We’re not sure if it is happening in the USA as well. Added November, 2011: Judging by the comments on my blog, this is definitely affecting the USA now as well.

In 2007 there were many cases of Fanconi syndrome in the USA.  These cases were linked to melamine contamination in treats made in China.

In 2009 there was a rash of cases of dogs with Fanconi syndrome in Australia.  These were connected to either chicken treats or dental chews that were made with corn, soy and rice.

I’ve had several people ask me if there is a recall on Waggin Train Chicken Tenders.  At this point, there is no recall for any chicken jerky treats at all.  There is simply suspicion that something may be going on.  Some of the readers of this blog have commented (see comments section below) that their pets are being treated for an illness and that Waggin Train Chicken Tenders may be involved.  , but apparently they do use ingredients from China. Added November, 2011: A number of readers have pointed out to me that the bag for Waggin Train states proudly that they are an “American Company”, but in small letters it does say that it is “Made in China”.

The Waggin Train website does not contain any information about a problem with their treats.

Again, so far there is no recall.  I have written an email to Waggin Train to ask for an official comment from them about the situation.

Added July 25, 2011:
I just received a reply from Waggin Train and have their permission to post it here:

Thank you for contacting us regarding Waggin’ Train treats. We apologize for the delay in responding.

You are correct – there is not now, and never has been, a recall of Waggin’ Train products. In 2007, the U. S. Food and Drug Administration (FDA) issued a notice regarding dog illnesses, but was unable to determine a definitive cause of the illnesses or a direct link to chicken jerky products. To date, extensive testing performed by the FDA has not uncovered a contaminant or specific ingredient as the cause of any illness, including in Waggin’ Train treats.

It is widely accepted that any association between dog illnesses and chicken jerky is likely the result of dogs (primarily small dogs) consuming treats in excess of normal or recommended levels. Chicken jerky products should not be substituted for a balanced diet and are intended to be used occasionally, in small quantities. Consumers should read and follow the feeding guidelines found on Waggin’ Train packages.

We have a comprehensive food safety program in place to ensure the safety of our products. We only use high-quality ingredients in our products, and the production facilities are designed and operated to meet U.S. Department of Agriculture standards. We have a dedicated team of quality control experts on the ground in China – in the plants when Waggin’ Train products are being produced. They monitor various steps of the manufacturing process for safety and quality of the product.

The safety and efficacy of our products is our top priority, and consumers can and should continue to feed Waggin’ Train treats with total confidence.

Is your pet sick?

If your pet is sick and your vet suspects it is because of chicken jerky treats, please leave a comment below indicating what brand of treats they eat.  The more people who comment, the more we may be able to figure out the source of the problem!

What do I do if I think my dog has Fanconi syndrome?

If your dog is drinking and urinating more and he or she has eaten chicken treats from China, then it goes without saying that you should stop giving those treats.  The next step is to have your vet examine your dog and do some blood and urine tests.  These tests will quickly tell us whether the dog has Fanconi syndrom or whether there is another problem such as diabetes, cushing’s or kidney disease.  If there is Fanconi syndrome the vet will tell you whether it looks like there is damage to the kidneys.  If so, they may need to give intravenous fluids for a few days.  If there is no damage then your dog will likely recover over the next few weeks.

If you think your dog has been affected by chicken jerky made in China, please let us know!  Leave a comment telling us what happened and also, if you can tell us the brand and lot number of the treats this would be very helpful.  We will forward this information to the CVMA and FDA to see if we can help determine exactly where the problem is coming from.

Want to file a complaint?

If your dog has been affected PLEASE file a complaint with the FDA. You can do so here.