It is widely believed that certain breeds of dogs are less likely to cause people with dog allergies to be affected by them, but a new study is saying that this is not true! Dogs such as the Bichon Frise, Poodles, Schnauzers and others have been classified as hypoallergenic breeds because they did not shed and released less dander and saliva. 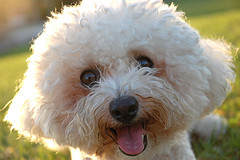 Photo courtesy of Mr Robot, Flickrdid not shed and released less dander and saliva than other breeds.

The purpose of the study was to determine if there was less “dog allergen” in the homes containing a dog breed that was considered to be hypoallergenic.  They looked at dust samples from the carpet or floor of 173 homes.  Each home contained one dog – some were in the list of breeds believed to be hypoallergenic and others were not.

The author of the study, Christine Cole Johnson, Ph.D., MPH, did say that there were some limitations in the study as they did not regulate how much time each dog spent in the room that was sampled, and they didn’t have enough data to evaluate specific breeds.

Do you have any experiences with having a “hypoallergenic” breed of dog?  If so, I’d love to hear them!  Leave a comment below.

2 Responses to "Do hypoallergenic dogs exist?"