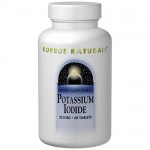 Concerns over pending nuclear fallout in Japan have caused a spike in sales of potassium iodine tablets, not only in Japan, but also one the western coast of USA and Canada.  Some health food stores are completely sold out of potassium iodide as many pet owners are administering them to their outdoor cats and dogs to help protect them if a cloud of nuclear radiation travels over the ocean.

Well really, it doesn’t.  You’ll see at the end of my article why I don’t believe any animals should be getting potassium iodide.  However, I’ll try to explain here why people are buying up iodine like crazy.

When people or pets are given radiation in the form of I131 (known as radioactive iodine) for cancer treatments, the radioactive iodine is absorbed quickly by the thyroid gland.  It was discovered that it helped if these people were given potassium iodide (a form of iodine) before they had their radiation treatment.  What happens is this–the thyroid gland iodine receptors would absorb the potassium iodide.  Then, when exposed to radiation, the iodine receptors were already full and they did not take up the radiation.  Here is a graphic example of this: 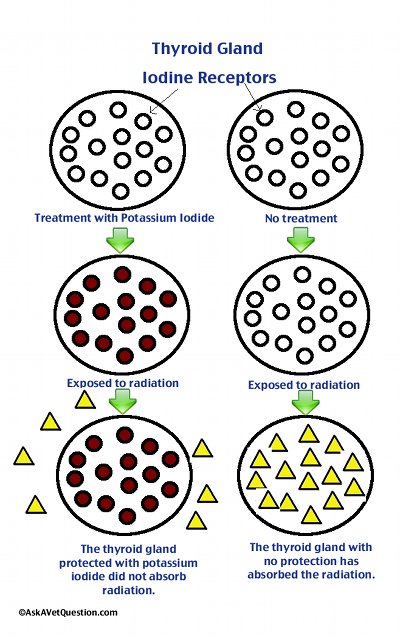 With that being said, the risk of overdose is small.

What is the dose of potassium iodide to give to a dog or cat?
Wait!  Did you read the entire article?  Potassium iodide is not likely to help protect your cat from radiation poisoning.  But, if you are paranoid and desperately want to give it, here are some doses that have been published:

Take note of the potential side effects as described above.  Use at your own risk!  Again, this is not likely to be too helpful.  If there is any benefit, the medication must be given at least 4 hours before exposure to radiation.  Kelp tablets may be another source of potassium iodide as well.

Added March 25, 2011:
Does Beta-Glucan prevent against radiation?
I just had a comment added to the blog that said that beta glucan is a great protection against radiation exposure. This is not true, but I can understand where the confusion comes from.

Beta-Glucan is sometimes given to people after they have had radiation therapy for cancer. The drug is not meant to protect people from radiation. Rather, it is meant to help the immune system fight against the effects of the radiation. When people have radiation therapy for cancer they will often have damage to their bone marrow. This can result in decreased numbers of red and white blood cells. The Beta-Glucan is a supplement which is believed to help boost the immune system create more red and white blood cells once the radiation treatment is stopped.

Beta-Glucan will not protect against nuclear accident radiation.

Comments?
I’d love to hear your comments on this article.  Feel free to drop a line below!

8 Responses to "Will potassium iodide prevent radiation poisoning in pets?"

Leave a Reply to DrMarie