The FDA has announced the approval of a new drug used to treat urinary incontinence in dogs.  Incurin contains Estriol which is a hormone that helps improve the tone of the muscles of the urethra. 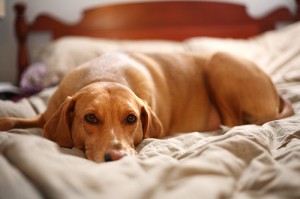 This medication is extremely similar to diethylstilbestrol (DES) which veterinarians have been using for years to treat USMI (urethral sphincter mechanism incompetence) otherwise known as Estrogen Responsive Incontinence.  However, in many places, DES is now unavailable.

Incurin will likely be the most widely used drug for hormone responsive incontinence in dogs as it is an “on-label” treatment for this problem.

To read more about USMI including treatment with other drugs such as PPA (Propalin), see here —-> USMI in dogs.