The Pot Patch for Dogs

In search of a natural pain reliever for your pet?  Well, look no more!  A patent has just been granted for “the pot patch” – a patch that administers medical marijuana to cats, dogs and horses.

Medical Marijuana Delivery Systems, LLC, based in Seattle, has developed this patch and plans to have it on the market by the end of the year.

The pot patch may not be legal in states that do not allow the use of “medical marijuana”.  However, the company plans to push for legislation to allow this product to be used legally for pets.

There is concern that people start using their pet’s medication though! 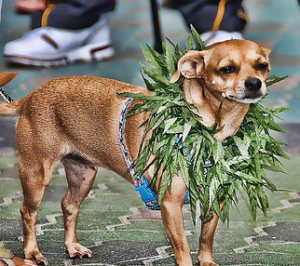 What would marijuana be used for in pets?

The product will be marketed as a natural pain reliever for dogs, cats and horses.  Vets currently do use patches for pain relief in pets.  One example is the fentanyl patch that releases a powerful pain relieving drug over a period of about 3-5 days.

One major concern though will be for safety.  A problem with using patches in pets is that the patch can be easily removed and swallowed.  This could potentially cause marijuana toxicity, or the patch could obstruct the intestines.


What do you think?

So, what do you think about pets using marijuana?  Leave a comment below!