Added May 7,2012: Diamond had incorrectly reported the production codes (to determine if you had an affected bag). I have now updated the article to reflect the correct codes.

Added May 18, 2012: The recall has been expanded to include Diamond Naturals Small Breed Adult dog Lamb and Rice as well (see below).

The Diamond Recall has expanded!  For the last couple of weeks I have been writing about several recalls on foods manufactured by Diamond.  Initially, there was a recall on Diamond Naturals Lamb and Rice.  This was followed by a recall of Chicken Soup for the Pet Lover’s Soul.  Then, there was a recall on Diamond Puppy Food, and now the recall has been expanded to include several other brands, including Kirkland food sold at Costco. 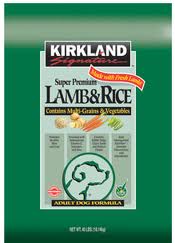 A few weeks ago, I had a number of my Facebook fans ask me if I had heard if there was a recall on Kirkland dog food.  At that time, no announcement had been made.  But, many of you were suspicious, because Kirkland brand food was manufactured at a Diamond plant.  So, I asked my readers to let me know if any of you had problems with your dogs getting sick on the food.  The results were astounding.  You can read the hundreds of comments here:

Initially, many readers wrote to say that their dogs ate Kirkland food and had no problems.  But I also had several people who claimed that their dogs either got sick after eating the food, or refused to eat it when they had bought a new bag.  I was skeptical at first.  It is not uncommon for a dog to have some intestinal upset after changing foods.  But, your comments started to concern me.  Here are some examples:

“For appx 2 years I have fed my dogs Kirkland Natures Domaine turkey dog food. About 1 1/2 weeks ago I opened a newly purchased bag. Neither of my dogs would eat it. My golden retriever finally ate it , threw up, had stomach distress and would not stop eating grass for days.” – Deborah

“Hi Dr. I feed my dogs the Kirkland Super premuim puppy with chicken rice and vegetables. They’ve been eating it for 3 days now. As of yesterday (day 3) 2 out of the 4 (those 2 eat more than the other 2) started to vomit and shake and it was a very frightening thing to see.” – Ana

“Hi my name is Tina i was feeding my pup kirkland dog food in the burgundy bag duke was a healthy 4 month old pure bread german sheppard puppy he passed away on saturday march the 17 at 11:00 pm we believe it was the dog food that made him ill his symptoms were as follows lose of appetite increased fluid intake vomiting bloody diarreah rapid weight lose and very lathargic the symptoms came on very suddle and only lived for about 4 days after the symptoms got worse. we called costco and they said nothing about any recall on the food infact they were argumentive about returning the bags of food .” – Tina

“OMG! I am devastated! Last week my 12yr old – super healthy – Weimaraner started throwing up. Then she started throwing up blood, then she wouldn’t eat her treat, then she wouldn’t eat period. She lays on the floor and shivers uncontrollably. I have to pick up my other dog’s food because normally, she will eat anything.  2 Days ago my 5yr old Great Dane started having diarrhea and getting sick. I have been feeding Kirkland Lamb and Rice for 10+ years. I just bought another bag of Kirkland Lamb and rice yesterday in case something was wrong with my old bag. They wouldn’t touch it.” – Diane

These are just a few of the many heartbreaking comments.  I knew there had to be a problem.  I had planned to review the comments this weekend and see if I could find any patterns.  But this is not necessary, as Diamond has expanded their recall to include Kirkland as well as several other brands of food.


The official announcement from Diamond

Diamond put out a press release today with more information about the expanded recall.  This is a voluntary recall.  They claim that, so far, none of the recalled bags have tested positive for Salmonella.  Given that there was such a mixture of comments on my blog, (i.e. many people claiming their dogs were sick and others saying that their dogs ate the same food and had no problems),  I am guessing that the issue with Salmonella contamination is a sporadic one and is not affecting every bag of food, but just random ones.

The type of Salmonella that is causing these infections is believed to be a rare strain called Salmonella Infantis.

What foods are being recalled?

The following brands are involved in the recall:

For these foods, Diamond gives the following instructions to know if your particular bag is recalled:

The following Kirkland pet foods are being recalled: (updated May 7, 2012)

For the Kirkland foods, Diamond gives the following instructions to know if the food is recalled:
“To determine if their pet food is recalled, consumers should check the production code on their bag. If the code has both a “3” in the 9th position AND an “X” in the 11th position, the product is affected by the recall. The best-before dates for the recalled products are December 9, 2012 through January 31, 2013.The following graphic illustrates how to read the production code and best-before date:”

The recall affects foods sold in the United States, Puerto Rico, and Canada.

The following Apex foods, sold in South Carolina are affected:

There is a recall on the following Canidae foods:

The diamond website gives the following instructions for determining whether your bag of Canidae is affected:

To determine if their pet food is recalled, consumers should check the production code on their bag. If the code has both a “3” in the 9th position AND an “X” in the 10th or 11th position, the product is affected by the recall. The best-before dates for the recalled products are December 9, 2012 through January 31, 2013.

Salmonella poisoning can cause a dog to have vomiting, diarrhea (sometimes bloody), fever, abdominal pain and chills.  If your dog has eaten a Diamond pet food and has these symptoms, please see your vet.

What will the vet do?

If the dog is not terribly sick, the treatment may be quite simple.  The vet may prescribe medication to help with intestinal upset as well as a special food that is gentle on the intestines.  But, if your dog is dehydrated, has a fever, or extremely lethargic then the treatment may involve intensive hospitalization with intravenous fluids, blood testing, and medications.  Judging by the comments on the article I wrote when I first became suspicious about problems with Kirkland dog food, some dogs may be dying from Salmonella poisoning connected to this food recall.  Therefore, this is not something to take lightly!

Can this problem affect people?

Yes!  There have been a number of reported cases where people may have gotten ill from either handling the tainted dog food, or the stools of pets who have eaten this food.  For more information, read this: People getting infected with Salmonella from contaminated dog food.  If your dog has eaten one of the recalled foods, and you, or a family member is unwell with vomiting, diarrhea or fever, then please see your physician immediately.

Has your dog become ill from eating a tainted Diamond food?  Do you suspect that you, or a family member has become ill because of this recall?  I would greatly appreciate your comments below.  By commenting, you can help others who are looking for information.  Also, please share this article on Facebook, Twitter or by email to spread the word so that more dogs don’t get sick!