Oregano instead of antibiotics?

It sounds wacky, doesn’t it?  Who would think that the spice oregano could take the place of antibiotics?  Is this just a silly internet rumor?  Or is there any truth to the idea that oregano can replace antibiotics? 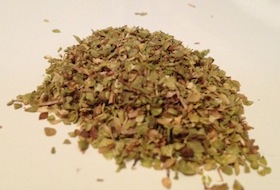 I came across an article from the NY Times where a farmer describes using oregano in place of antibiotics in chicken feed.  My first thought upon reading this is that people are going to be wondering whether or not oregano can be used for cats and dogs who are in need of antibiotics.   There is some evidence to show that oregano has antibacterial properties.  Will it be replacing man made antibiotics?  Read on and see what I discovered.

It is believed that Oregano has some effectiveness against certain bacteria.  I was able to find a number of research articles that studied whether or not oregano could act as an antibiotic.

Most of the studies looked at something called OEO (Oregano Essential Oil).  This is an oil that is made from oregano.  It is a much more concentrated form of oregano than oregano leaves.  (See below for a study that looked at the oregano leaf).  This study found that OEO had decent effectiveness against certain types of E. Coli bacteria.  They found that when they administered OEO to chickens along with traditional antibiotics, the dose of antibiotic needed to control infection was lowered.  Also, the addition of OEO caused the chickens to show fewer side effects to antibiotics.  This is a good thing!

Another study, showed that OEO was effective against several types of bacteria.  They even concluded that a commercial blend of oregano oils, rosemary oils and others could be used in the place of antibiotics in the feed of chickens.

Almost every study I could find, however, discussed the benefits of Oregano Essential Oil.  But what about the oregano leaf that you and I have in our kitchen?  I did find one study that examined how effective the dry oregano leaf was when used in the place of antibiotics in chickens.  The study found that there was no benefit at all to using oregano leaf.  The chickens on antibiotics were healthier and grew larger than those given the oregano leaf supplement.

Oregano instead of antibiotics for cats and dogs?

But what about in cats and dogs?  Should we be using oregano instead of antibiotics?  Is it a natural remedy?

What this information tells me is that it likely isn’t safe to treat animals with OEO.

I would definitely not recommend using oregano as a substitute for antibiotics in cats and dogs.  It’s not likely to work.  Plus, if you use the oil formulation it could be quite harmful.

I’d love to hear your thoughts on this article.  Please leave a comment below!