Here we go again with another chicken jerky problem.  The FDA has put out a warning that Nature’s Deli Chicken Jerky treats should not be fed to pets.  The company who makes the chicken jerky has initiated a voluntary recall because of the possibility of Salmonella contamination.  The treats are sold at Costco Stores. 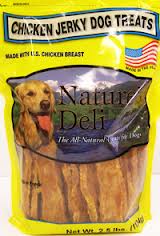 The bags that are being recalled are the three pound packages with a lot code of BESTBY061913DEN.  They have been sold at Costco, but only the Costco stores in the Denver, Colorado area.

Why are the treats being recalled?

Three months ago, in September 2012, a sample test for the bacteria Salmonella came up positive.  The FDA tested 72 additional samples and 34 of them were positive for Salmonella.  There was a very small recall initiated in October of 2012.  Then, in November of 2012, another sample turned up positive as well.

How many dogs are reported to be sick?

The FDA report states that no reports of illness have been made.  It is interesting to note, however, that I recently received a question on my website asking about whether there were any problems with this product.  You can read this question here: Any Problems with Nature’s Deli Chicken Jerky?  In this question, a dog owner was suspicious that this chicken jerky, purchased at Costco in Denver, Colorado had made her dog sick.  Her dog had an increase in thirst in urination that was associated with eating these treats.

Are these treats connected to the previous problems with chicken jerky?

Thirst and urination are not signs of salmonella poisoning.  Dogs affected by salmonella will generally have vomiting, diarrhea, lethargy and lack of appetite.    But, the symptoms of thirst and urination have been connected with chicken jerky issues in the past.  In June of last year I initially wrote a post describing concerns that chicken jerky could be causing something called Fanconi syndrome in dogs.  You can read the post here:

This post was shared over 14,000 times on Facebook and received over 600 comments from people who believed that chicken jerky strips had made their dogs very sick, or, in some cases had killed their dogs.  To this date, the cause of these illnesses has not been identified.  No official recall was ever made, yet, I still continue to get comments left on that post that dogs are getting sick.

With all of that being said, this current recall for salmonella contamination is probably NOT connected to those previous problems.

What to do if you have an affected bag.

Apparently Costco will be calling people to let them know if they have purchased one of the recalled bags of treats.  Costco did something similar when Kirkland Dog Food was recalled.

If you believe that your dog is not well as a result of eating these treats then it is best to contact your veterinarian.  Symptoms, again, include vomiting, diarrhea (sometimes bloody),lack of appetite and lethargy.  Please ask your vet to file a report with the FDA so that this reaction can be tracked.

It is also important to note that people can get salmonella from handling contaminated chicken jerky.

Do you have a recalled bag of Nature’s Deli Chicken Jerky?  If so, please leave a comment below describing what happened and also where you purchased the bag.  Your comments can help us determine if this problem extends further than Colorado and will also help other people who are looking for information on this recall.