Is Trifexis safe? Are the internet rumors of Trifexis side effects true?

Added December 2012: This article has collected a LOT of comments from people concerned about Trifexis side effects. I am torn on how to report on this issue. The fact that hundreds of you feel that Trifexis has been harmful to your pet is disturbing. However, if Trifexis is causing these serious side effects then I should be able to find a lot of discussion about this on places like Veterinary Information Network where tens of thousands of vets talk about their cases, and I am not.

Trifexis is a relatively new heartworm and flea medication.  I have been prescribing a lot of it this year and it seems to be quite effective.  But recently I have heard a number of people on the internet complaining of possible serious Trifexis side effects.  So, is it true? Does Trifexis have serious side effects? Is Trifexis safe? 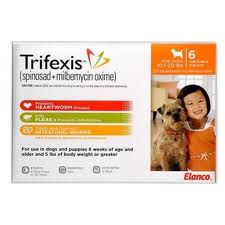 Trifexis is a combination of two main ingredients.  The first is something called Spinosad which is the same flea killing medication found in Comfortis.  The second is called milbemycin.  Milbemycin is the same ingredient in Interceptor and Sentinel that is excellent for heartworm prevention and intestinal parasite control (hookworms, whipworms and roundworms.)

This year, Interceptor and Sentinel are not available because of a widespread shortage.  What this means is that many people who want to use an oral heartworm and flea preventative are turning to Trifexis.

The medication is given once a month along with a full meal.

The following message is rapidly spreading via email and Facebook:

Fwd: hey…whatever you do…DON’T GIVE YOUR DOGS TRIFEXIS. HEARTWORM MED…jack is in the hospital..we tried trifexis for the first time yesterday (his interceptor has been off the market). and by 8 pm symptoms started…I had to take him in at 7 am..lethargy..confusion..tremors with a twitch every 15 seconds..no appetite..he looks like he’s on an acid trip..his gut is drawn up…all symptomatic of poisoning..vet called company …they admit some problems..will pay for blood panels on internal organs for toxicity reports but won’t pay for rest of treatment…so many people will be trying this drug due to not being able to get the discontinued interceptor or sentinel…tell all your dog friends… NO TRIFEXIS…EVER !

Let’s look first at the information available on the Trifexis website in regards to Trifexis side effects:

Trifexis has been demonstrated to be safe in pure and mixed breeds of healthy dogs when used according to label directions for dogs and puppies 8 weeks of age and older and five pounds of body weight or greater. You should discuss the use of Trifexis with your veterinarian prior to use if your dog has a history of epilepsy (seizures). Puppies less than 14 weeks of age may experience a higher rate of vomiting.

Important point: Trifexis should not be used in an animal that has a history of seizures.

Why is this? The makers of Trifexis don’t actually know if the drug is more likely to cause a seizure in an animal.  However, one of their test subjects did reportedly have a seizure shortly after taking Trifexis and so this must be listed on the label as a potential Trifexis side effect.  So far, in my practice, I have yet to have an animal have a problem with Trifexis (or Comfortis which also has spinosad in it) causing a seizure.

It is important to note that if an animal did have a seizure because of Trifexis, it would be most likely to happen within 1-3 days of administration.  If an animal has a seizure later on in the month it would be hard to blame Trifexis for it.

Some more information on side effects, from the Trifexis website:

Like all medications, sometimes side effects may occur. In some cases, dogs vomited after receiving Trifexis. If vomiting occurs within an hour of administration, redose with another full dose. During field studies, no severe or prolonged vomiting occurred. Additional adverse reactions observed in the clinical studies were itching, decreased activity, diarrhea, inflammation of the skin, redness of the skin, decreased appetite and redness of the ear. All reactions were regarded as mild

Well that sounds a little scary, doesn’t it?  But really, if you look at the list of side effects for almost any drug you will see that there is a great list of possible mild side effects.  What is listed here does not seem much worse than the possible side effect list for most other pet drugs.

The truth about Trifexis side effects?

Well, at this point, the truth is that we really don’t know if Trifexis is safe or dangerous.  As with any drug, there will be some animals that don’t tolerate it as well as others.  Is it dangerous enough that it is killing dogs and causing severe seizures?  I would guess, no.  But then, this is why I have written this article.  I would like your help in spreading the word and encouraging people to  leave a comment.  (We did a similar thing when people were complaining about side effects in regards to Kirkland dog food, and sure enough, shortly after I wrote that post and you guys responded with your experiences, a recall was announced!)

Remember, just because you read something on the internet, it doesn’t mean that it is true.  But, if enough people are saying the same thing then there may be some truth.  My goal is to take the information gathered from the comments in this post and put the data together to see if we can see any patterns.  If there is a problem, then something should be done.  If there is no problem, then Trifexis should not be given a bad name.

Have you been affected by Trifexis side effects?

Do you believe that your dog has suffered Trifexis side effects?  If so, please leave a comment below.  It would be helpful if you could include the following information:

Thank you!  And please share this information with others so that we can determine the truth!

803 Responses to "Is Trifexis safe? Are the internet rumors of Trifexis side effects true?"