Chicken Jerky Recall – Is this why pets were getting sick?

It’s hard to believe that it has been 19 months since I first wrote about a potential problem with chicken jerky treats in dogs.  Since then, hundreds of people have left comments on that article, describing how their pets have gotten sick.  Some have even claimed that their dogs had died as a result of eating chicken jerky. 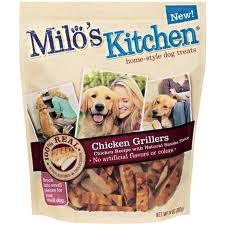 One common thread was that these potentially tainted treats were all made in China. But, to this day, the FDA has not discovered any obvious reason for the treats to be making dogs sick despite doing intensive testing on many different brands.

These brands were mentioned several times in the comments of my initial article on potential problems with chicken jerky in dogs.  Here are some excerpts:

All three of [my dogs] were very ill in September and I had just purchased a bag of Milo’s Kitchen chicken jerky – and they are labelled as Made in China. The oldest died -18 yo – very painfully. The 12 yo showed signs of kidney and liver failure and we (Vet and me) put her on a Hill’s K/D and very strict diet – the puppy was only ill for a couple of days and was fine.

Four weeks ago I purchased Waggin Train Chicken jerky and immediately noticed an increase in drinking and urination. After reading this information, I have taken them away.

We lost our darling great-hearted dog, bruna, yesterday & as devasted as we are to no longer have her as a member of our family, it’s a 1000 times worse to suspect that her death was entirely preventable. we had just opened a new bag of canyon ranch creek chicken jerky treats & had no idea that they were potentially lethal. she followed the same sad course that others describe here–a seizure, incontinence, extreme lethargy & unresponsiveness. finally, at the vet’s recommendation, we sat with her as she was put down.

You can read more of the comments from this article here.

Why are these treats being recalled today?

The recalls announced today happened because small amounts of antibiotic residue were found in the treats. According to NBC news, these antibiotics included sulfaclozine, tilmicosin, trimethoprim, enrofloxacin and sulfaquinoxaline.  It is commonplace for these antibiotics to be used in chickens raised in China.  But, they are not legal in the US.

Although some of the affected chicken jerky treats have bold label claims that they are made in the USA, if you look closely you will see that there is small print which describes that the ingredients are from China.

Is this why so many dogs have been sickened after eating chicken jerky?

It is unlikely that antibiotic residue in the treats were the cause of the illnesses that affected so many dogs in the last year and a half after eating chicken jerky treats.

In this article, I discussed an FDA document which showed line after line of testing that was performed on a variety of chicken jerky treats.  The FDA has done plenty of testing to determine what, if anything could be wrong with these treats.  This testing included searching for antibiotic residues and none were reported.

Antibiotic residue is unlikely to cause the symptoms that were described in dogs previously sickened by chicken jerky.  Those symptoms include a variety of possible symptoms including an increase in thirst and urination, vomiting and diarrhea and even death.

At this point, the FDA does not believe that this current problem is connected with the issues of chicken jerky in the past.

Has your dog been affected by chicken jerky treats?  If so, I would love to hear your comments.

4 Responses to "Chicken Jerky Recall – Is this why pets were getting sick?"