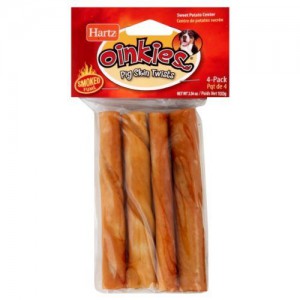 This recall is happening for very similar reasons as the Milos, Waggin’ Train and Canyon Creek chicken jerky recall that I wrote about last month.  The reason in both cases, is that antibiotic residue was found in the treats.

According to Sean McNear , Sr. Director of Quality and Regulatory at Hartz Mountain, when Hartz heard of the previously mentioned chicken jerky recall, they began to do testing to determine whether their treats were affected with the same issue.  It turns out that one third of the treats tested did indeed contain antibiotic residue.

Is this why dogs are getting sick from eating chicken jerky?

It is very unlikely that this antibiotic residue is what has caused so many dogs to get sick after eating chicken jerky.  I recently wrote an article in which I theorized that the glycerin in chicken jerky may be what is causing dogs to get sick.  However, at this point, the FDA has announced that they don’t know what the problem is.  They are still investigating.

What harm does antibiotic residue in treats cause?

Antibiotic residue at these levels is very unlikely to cause any significant problems.  The levels of antibiotic residue that were found in the treats are actually acceptable in China, but not in the US.  In theory, if an animal had a sensitivity to a particular type of antibiotic it could cause a reaction.  However, I am not aware of any cases where this has happened.

If you have been affected by this recall, I would love to have your thoughts!