Scientists discover why cows have spots!

Isn’t science cool???  A new research study looked at possible reasons for cows to have spots and the researcher, Zen Faulkes thinks he has the answer! 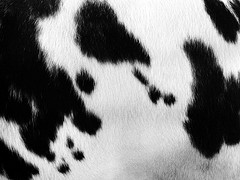 The proposed reason – to act as a fly repellant!

To do the study, they set out boards covered in glue.  The boards had varying amounts of spots.  They then watched as flies landed on the boards and got stuck to the glue.  What they found was that the boards that had the highest number of small spots had the fewest number of flies.

Next, they actually covered cows in glue and measured how many flies stuck to them.  Consistently, the cows with lots of small spots had fewer flies.  Dark brown solid cows attracted the most flies.

They believe that the reason for this has something to do with how flies look for water.  The flies need water in order to lay their eggs.  They detect water by looking for something called “polarized light”.  And for some reason, dark cattle fur polarizes light differently and is much more attractive to flies.

So should we all be wearing spotted shirts when we go outside?  According to Dr. Faulkes, this tactic may actually work to keep flies away!  However, he states that this won’t work for mosquitos as they don’t follow the same rules.