Pets to be banned from airline cabins?

This week the Canadian Medical Association has voted 93% in favor of asking airlines to ban pets from flying in the cabin.  The concern is that these pets may be severely affecting people with allergies to pets. 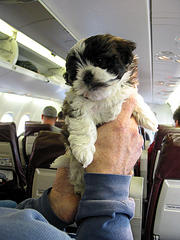 Are people getting sick?

I can understand that some people are severely allergic to animals.  And in an airplane, allergens in the air are not ventilated well with the air being recirculated. This can potentially result in serious allergic reactions for some people.

However, according to WestJet, in the past 18 months they have flown 58,000 pets in the cabin along with 25 million passengers.  In that time they have been made aware of a “handful of allergy-related incidents”.  An Air Canada spokesperson said that in their 70 year history they have only had “an infinitesimally small number of allergy related medical emergencies.”

Air Canada previously had a ban on pets in the cabin.  However, in 2009 they reversed this ban after a large amount of pressure from the public.


What can be done?

If you have pet allergies, and you are flying, the best thing you can do is to mention your allergies to a flight attendant.  They often will arrange the seating so that you are sitting as far away as possible from the pet.  Most airlines will have a limit on how many pets are able to be on each flight.  Also, some airlines will be willing to place you on another flight if you have pet allergies.  I can see how this could be inconvenient though!

Will the ban happen?

At this point, I am not aware of any airlines that are planning to comply with the recommendation to ban pets from flying in the cabin.  Why?  I believe it not at all about what is safe for passengers, but rather, what is going to make the airline the most money.

In 2006, Air Canada announced a “permanent” ban on pets in the cabin.  What happened, was not that people stopped flying with their pets.  Rather, they flew on a different airline that was pet-friendly and Air Canada lost a LOT of business.  I believe that the reversal of this decision by Air Canada in 2009 was completely a financial decision.

The only way a ban on pets in the cabin will happen is if it is imposed on all airlines.  Asking a particular company to comply voluntarily is not going to happen.

4 Responses to "Pets to be banned from airline cabins?"