Vitamin E and Selenium speed up healing of Sarcoptic Mange. 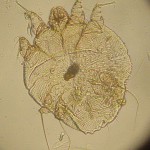 Researchers in India have made an important discovery that will help in the treatment of sarcoptic mange in dogs.

Sarcoptic mange is a skin mite that can cause extreme itchiness, usually on the backs of the elbows and ear margins.  One treatment for sarcoptic mange is ivermectin.  (However, there are other, possibly safer treatments such as Revolution).

In this study the researchers gave weekly injections of ivermectin to dogs with mange.  One group of affected dogs got only ivermectin, while the second group also got a weekly injection of vitamin E and Selenium.

The dogs who received the vitiman E and Selenium injection had a faster recovery from mange than those who were given ivermectin alone.