Something that’s in YOUR house could be causing your cat’s hyperthyroidism!

I just read a very interesting new study from the Journal of Toxicology and Environmental Health that looked at a possible cause for hyperthyroidism in cats.  The study looked at something called PBDE’s (polybrominated diphenyl ethers) and I can guarantee you that you have these in your house! 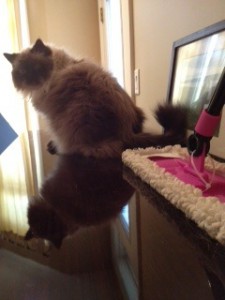 PBDE’s are chemicals that are used as a flame retardant.  They can be found in many places in our house including our furniture, electronics and building materials.  But, more importantly, there are a lot of flame retardant PBDE chemicals in….DUST!

What’s the connection between Flame Retardants and hyperthyroidism?

We know that PBDE’s have an effect on the thyroid gland, and researchers say that there is a good chance that PBDE’s are a main cause for hyperthyroidism in cats.  But why?  It was previously thought that high levels of PBDE’s in pet food were the main culprit (see this study).  (If anyone can tell me why on earth we have flame retardants in our pet foods, please leave me a comment below!)  The PBDE’s are thought to accumulate in the thyroid gland and make it more likely to develop a thyroid tumor.

The latest study shows that cat food has a PBDE level of between 0.42 to 3.1 ng/g.  As this level is 20-100 times higher than the level of PBDE’s in foods meant for human consumption, it was perviously believed that pet food must be the culprit.  However, the 2012 study found out the following interesting facts that lead the researchers to conclude that dust is even more of a contributor to hyperthyroidism than food:

It is believed that dust affects cats greatly because they are constantly grooming themselves and ingesting dust particles.  I don’t know about your cats, but mine like to hang out under the bed or behind the bookshelves or in other areas that may not get cleaned as often as others!

So, what can be done?

If I had a cat with hyperthyroidism, I would take this as a great excuse to hire a housecleaner!  If flame retardants in dust particles are accumulating in your cat’s thyroid gland, who knows how they are affecting the people in your house as well!  Another option for helping your cat would be to allow a greater amount of outdoor time.  (The study found that cats who were primarily outdoors had much lower levels of PBDE’s in their blood.) And, it is apparently possible to buy furniture and other products that have not had any flame retardants used on them as well.

Related: Now there is a new food to treat hyperthyroidism in cats.

2 Responses to "Something that’s in YOUR house could be causing your cat’s hyperthyroidism!"