Will neutering your dog cause cancer? Be careful how you interpret this new study.

Does spaying or neutering your dog greatly increase the risk of cancer? A new study seems to suggest so. An article in the Toronto Star recently discussed this study and in my opinion, has sensationalized the results. 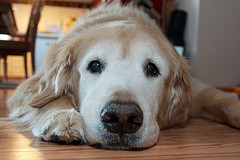 I think the study is interesting. But I have serious concerns about the conclusions that are being drawn. Should everyone wait to spay or neuter their pet until they are mature? Should we stop spaying or neutering pets altogether? Before we draw these conclusions, I think that more research needs to be done.

The study was performed by looking at Golden Retrievers at the University of California Davis Teaching Hospital. They looked at dogs who had been spayed or neutered before a year of age, after a year of age, and those who were intact (not spayed or neutered). Then, they looked at several different types of diseases including types of cancers such as lymphosarcoma and mast cell tumors, and also joint issues like hip dysplasia and cruciate ligament tears. There were several interesting findings:

The Toronto Star’s article sensationalized these results with a title of, “Don’t want your Golden Retriever to get cancer? Don’t neuter it”

The problems with the study

There are a few issues that I have with this study. The first is that it is only looking at Golden Retrievers. Many people are taking the results of this study and applying it to every breed. Goldens are peculiar, especially when it comes to cancer. We see more cancer in this breed which means that for some reason, cancer may act differently in a Golden Retriever than in other breeds. Fortunately, the authors of the study have plans to perform similar analyses in other breed populations as well.

The sample size was also fairly small. In the study there were 145 intact males and 122 intact females. Granted, the numbers were deemed to be statistically significant. However, I am cautious to change my recommendations on spaying and neutering based on a study that looked at a couple of hundred dogs.

My main issue with the study, however, is selection bias. The population of dogs that is seen at a veterinary teaching hospital usually does not represent the population in the real world. If a dog has not been spayed or neutered, this is usually because of one of three reasons:

1. The dog is being used as part of a breeding program.
2. The owners are philosophically against spaying and neutering.
3. The owners have not spayed or neutered their pet because of financial reasons.

In my practice, we do not have a large number of breeder clients. I would say that the majority of intact males and females that I see would fall into category 2 or 3. There are likely a large number of dogs in category 3 as well that rarely, if ever, see a veterinarian.

However, in a veterinary teaching hospital, I would surmise that a larger number of intact dogs that are seen will fall into category 1.  Dogs in category 3 are not as likely to end up in an expensive veterinary facility.

Why is this significant? It is significant because the type of breeder who is willing to take their pet to a veterinary teaching hospital for often expensive veterinary care is one who likely puts great effort into selecting the best of the breed to use for reproduction purposes. Good breeders will screen for hip dysplasia before breeding. If they notice patterns of certain breed lines becoming more likely to develop lymphosarcoma or other types of cancers then they are likely to adjust their breeding pairs to try to produce healthier offspring.

Conversely, if we look at neutered Golden Retrievers seen at a teaching hospital, why are they likely to be referred there? When I refer a patient to a teaching hospital, it is most commonly for orthopedic problems or a chemotherapy consult.  When we compare this to breeding dogs, while some can be sent to teaching hospitals for the same reasons, many of them will be referred because of reproductive issues such as C-Sections, pyometra spays, and theoriogenology (breeding) issues.

Can you see why I feel that this study may not be representative of the entire population?

Should we change our recommendations?

At this point, my recommendation remains the same. I generally recommend spaying and neutering at 5 to 6 months of age. However, my mind is not closed. I will continue to watch for more research. I would love to see a much larger study that looks at multiple breeds in general veterinary practice as opposed to looking at a veterinary teaching hospital’s population of cases that is likely biased.

This is a controversial subject. There are a lot of articles that discuss both pros and cons of early or late neutering or not neutering at all. I’d like to hear what you think. Please leave a comment below.

6 Responses to "Will neutering your dog cause cancer? Be careful how you interpret this new study."