One lot of Iams dog food has been voluntarily recalled because of  the detection of higher than expected levels of aflatoxin.  So far no dogs have knowingly become sick. 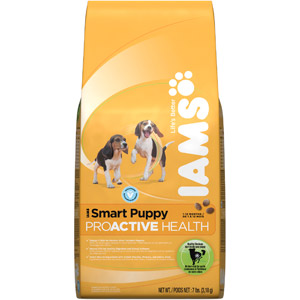 According to the official press release,  the food being recalled is Iams ProActive Health Smart Puppy Dry Dog Food.  The affected bags are either 7 lbs, 8 lbs, or 17.5 lbs and have a use by or expiration date of  February 5 or 6, 2013.  Look for the following code dates:

Or, the following UPC codes:

Aflatoxin is usually caused by fungal (mold) contamination of dog food by either peanut products or corn.  The symptoms are a little vague but can include:

Some dogs with aflatoxin poisoning can have serious liver disease and can die.  In 2006 there was a serious problem with aflatoxin contamination in some Diamond pet foods.  Many dogs died.

How serious is this recall?

It is important to note that this is a precautionary recall.  In the 2006 recall of Diamond pet foods there was a large amount of aflatoxin detected in the food.  In this recall by Iams the levels of aflatoxin were reported to be just slightly higher than the acceptable amount.

For most pet food companies, corn shipments into the pet food plant are screened for aflatoxin before being used.  However, it is possible for there to be little pockets of affected corn that avoid detection.  This is why a reputable company will continually be doing testing on their food to be sure there are no problems.  I believe that Iams was doing routine testing of their food when they realized that there was aflatoxin in this batch of food.

If you have fed your dog one of the affected lots and you feel that he or she is sick because of it then immediately contact your veterinarian.  The vet will run blood tests to determine if your dog’s liver has been damaged.  Your vet will also likely file a report with the FDA.

I would also greatly appreciate any comments from people who feel their pets have been affected by this.